7 Beaches To Visit When In The ‘African Eden’ 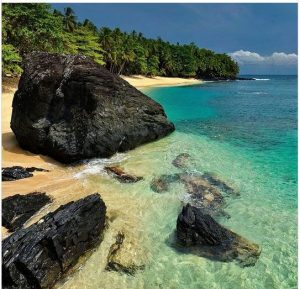 Known as the African Eden due to its beautiful and unexplored nature, São Tomé and Principe is an archipelago state, which holds two main islands (São Tomé and Príncipe). July 12 is the day this tiny paradise country celebrates its independence from Portugal, achieved just 46 years ago.

Surely, São Tomé and Principe has a lot to offer for those who love to explore deserted beaches, stunning nature landscapes and— at the same time— being away from highly visited international tourist spots.

The islands of São Tomé and Príncipe were uninhabited until 1470, when Portuguese navigators reached the Gulf of Guinea area. In the late 15th century, the Portuguese brought enslaved Africans from other regions to the islands to grow sugar.

According to some historians, São Tomé was for a brief time the world’s largest producer of sugar in the early 16th century, but the rise of Brazil‘s sugar production in the global scenario and the poor quality of São Tomé’s dried sugar virtually destroyed this industry. After that, the islands became a trading post, including the transportation of enslaved Africans to Brazil.

In 1975, after 575 years under Portuguese rule, the country gained freedom.

São Tomé and Principe has a privileged location that makes nature even more essential: situated in an equatorial region of dormant volcanoes under the sea, the archipelago has a very rich marine life, which is perfect for diving. It is also known as the land of sustainability: agriculture is strictly biological and chemical products are prohibited on the islands— not to mention the biodiversity that is also highlighted with forests where various species of endemic plants, birds, reptiles and amphibians live wild. 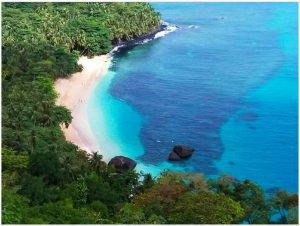 Over the past few years, São Tomé and Principe’s government decided to invest in tourism to attract visitors from all over the world in order to boost the country’s economy. In fact, for those who like to spend some days in a stress-free spot with astonishing landscapes and beaches along with being connected to Motherland Africa, São Tomé is the place to be.

Some resorts in the destination also provide specific activities and experiences, such as excursions in a 4×4 vehicle through the islands and beaches, boat trips, hiking trails through the vegetation, picnics on deserted islands or even tours.

To celebrate the independence of this small, but beautiful country, Travel Noire has compiled a list of places you should go if you decide to visit someday.

No products in the cart.

Sign up to receive latest news, updates, promotions, and special offers delivered directly to your inbox.
No, thanks